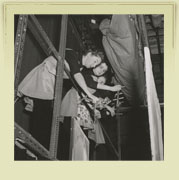 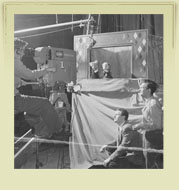 In 1948, Micheline Legendre founded Les Marionnettes de Montréal. She travelled throughout Europe and studied in Paris with Jacques Chesnais, one of the great names in European puppetry. Along with Rosalynde Stearn, Legendre was one of the first Canadian puppeteers to be recognized on the international scene. Her training has since shaped an entire generation of Quebec puppeteers.

In Ontario, British puppeteers George and Elizabeth Merten, who arrived in Canada in 1950, contributed a great deal to the popularization of puppet theatre. Hired by the Ontario Ministry of Education, George Merten held workshops and gave demonstrations, as well as training puppeteers. He also published books on the making and manipulation of puppets. Interest in puppets grew, and numerous puppeteer guilds, made up of both amateurs and professionals, were formed across the province. In 1957, Merten would become one of the founding members of the Ontario Puppetry Association: a professional organization that brought together the majority of these guilds, and remains active to this day.

In the 1950s, and even in the 1960s, marionettes and hand puppets were still the most popular type. The puppet theatre repertoire remained traditional: fairytales and legends, variety shows and adaptations of musical works. At the same time, however, puppeteers were becoming more interested in the artistic dimension of production, and different venues for puppetry began to open up. In addition to department-store performance halls, carnivals and trade shows - typical sites for puppet shows in the 1920s, 1930s and 1940s - puppetry expanded to parks, libraries, schools, the occasional larger upscale establishment, and, of course, a completely new venue for the creation and spread of puppetry: the television studio.

Indeed, when Canada launched its public television network in 1952, it was puppetry that made the kickoff. The French network, Société Radio-Canada, presented the very first episode of Pépinot et Capucine: characters created by Edmondo Chiodini, who entertained young and old viewers alike once a week. The first program on the Canadian Broadcasting Corporation's English airwaves featured John Conway's characters Uncle Chichimus and Hollyhock, who provided wry commentary on the news of the day.

So it was that puppets began to make their way into every household: through the medium of the small screen. In the decades to follow, the first - and sometimes only - contact the public would have with puppets was most often made through television. The large number of puppet-based programs for children reinforced the notion of puppets as being conceived, first and foremost, for youngsters. Many puppeteers saw working in television as an opportunity to make a reliable living, and welcomed the chance to contribute to the development of this new medium while pursuing their craft onstage.