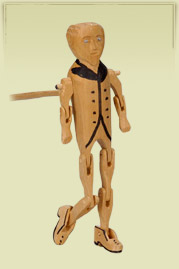 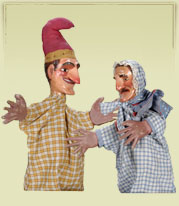 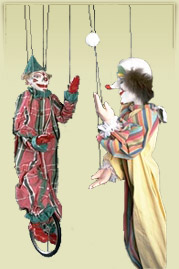 Around the middle of the nineteenth century, a small wooden doll who danced to fiddle music began to appear in rural areas. This was the "limberjack" or jig doll, who some considered the traditional puppet of the New World. The small figure, held by a rod attached to his back, has articulated limbs, and dances when a wooden slat is jiggled beneath his feet. He livened up parties and celebrations and, when the Catholic Church prohibited dancing, he carried on shamelessly. The limberjack was rediscovered in the 1970s, when a renewed interest in traditional folklore emerged.

Meanwhile, in the large cities during the nineteenth century, travelling entertainers - most of whom arrived during the country's successive waves of immigration - presented puppet shows preserving traditions from their various countries of origin. The best-known shows starred the popular English puppet characters Punch and Judy, and were held, following tradition, in public venues such as fairs and marketplaces, as well as in the parlours of middle-class families.

Towards the end of the 1880s, sizable troupes from Great Britain and the United States staged variety shows, bringing together actors, singers, acrobats and puppeteers. These shows provided a rare opportunity for audiences in the larger cities, particularly those in Ontario, to experience professional puppet theatre. The puppetry acts were made up of short pieces that used imitation and special effects as a means of showcasing the technical skills needed in manipulating marionettes. This practice of staging short pieces would continue until the 1960s. These puppetry shows were most often staged in nightclubs and music halls, as part of amateur presentations and even in variety programming during the early days of television.